When Everyone Stays Home: Empty Public Spaces During Coronavirus

Article by The Atlantic 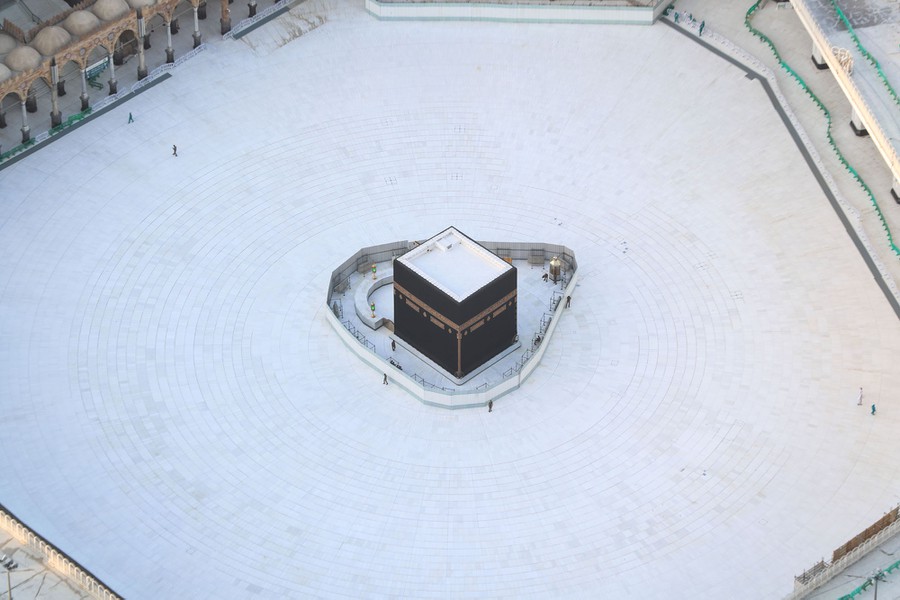 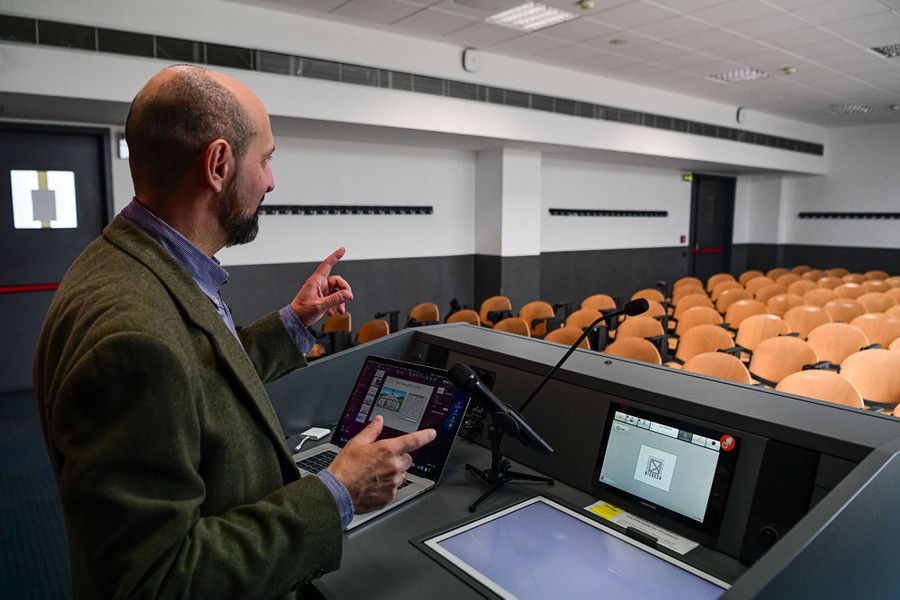 Professor Maurizio Casiraghi of the Department of Biotechnology and Biosciences of Milano Bicocca records a lesson on the evolution of genomes in an empty classroom in Milan, Italy, on March 5, 2020. Italy closed all schools and universities until March 15 to help combat the spread of the novel coronavirus. Piero Cruciatti / AFP / Getty. 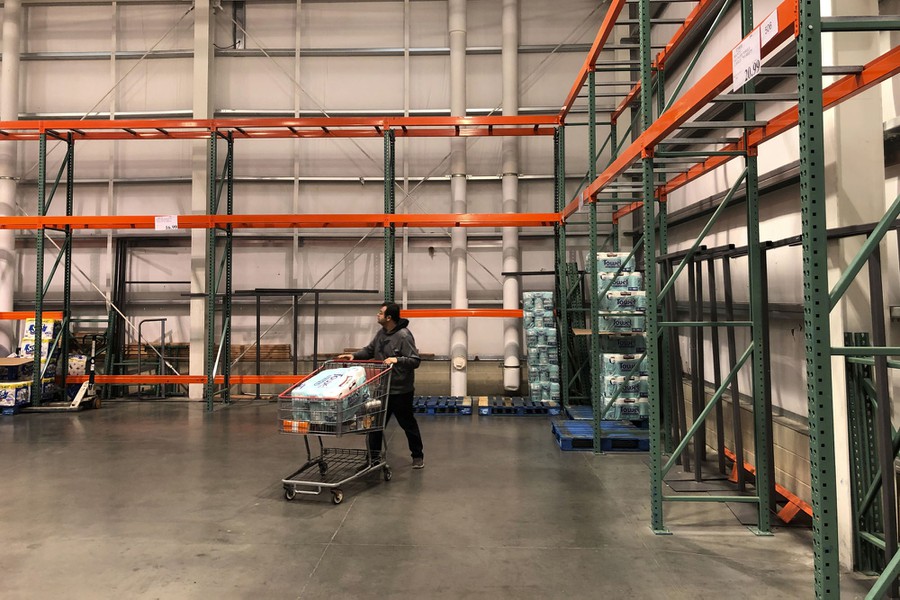 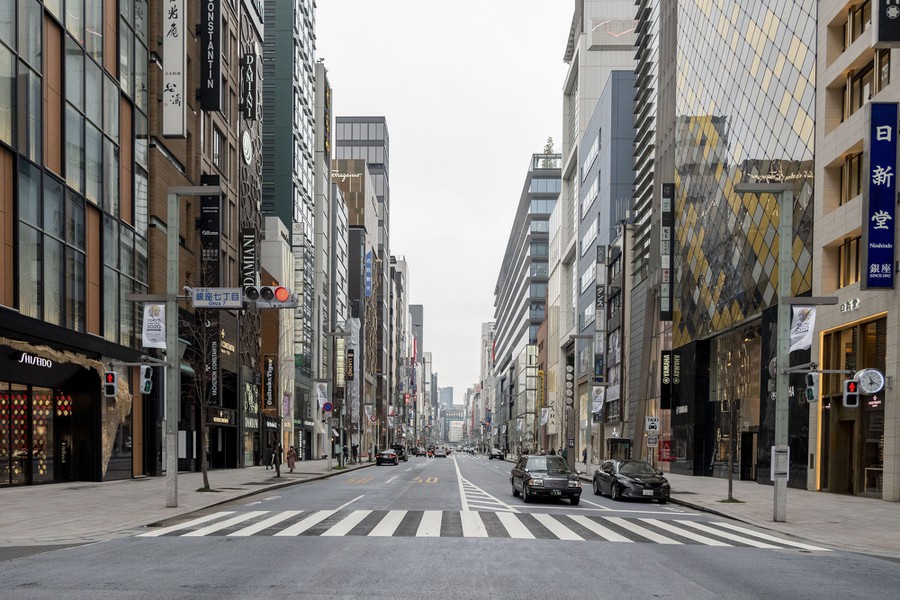 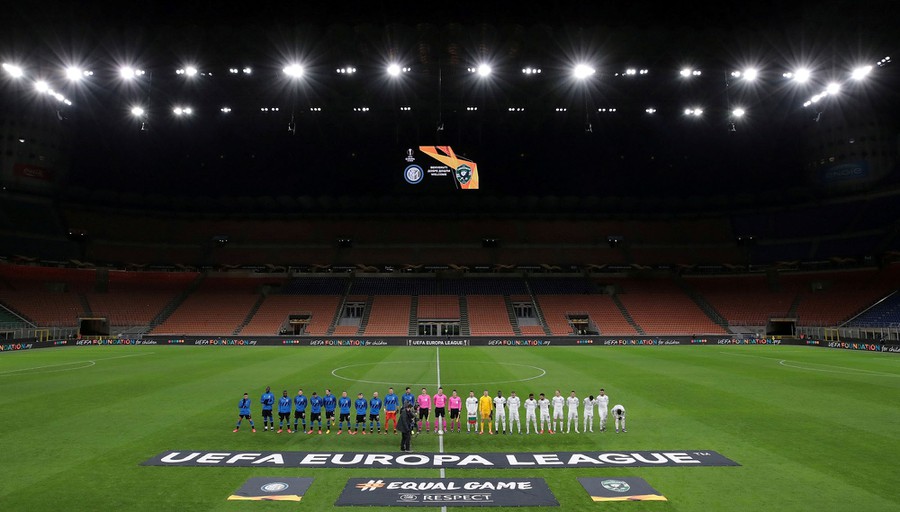 Teams line up in an empty stadium, before the Inter Milan versus Ludogorets Europa League match; fans were not allowed in because of coronavirus fears, in San Siro, Milan, Italy, on February 27, 2020. Emilio Andreol / Reuters. 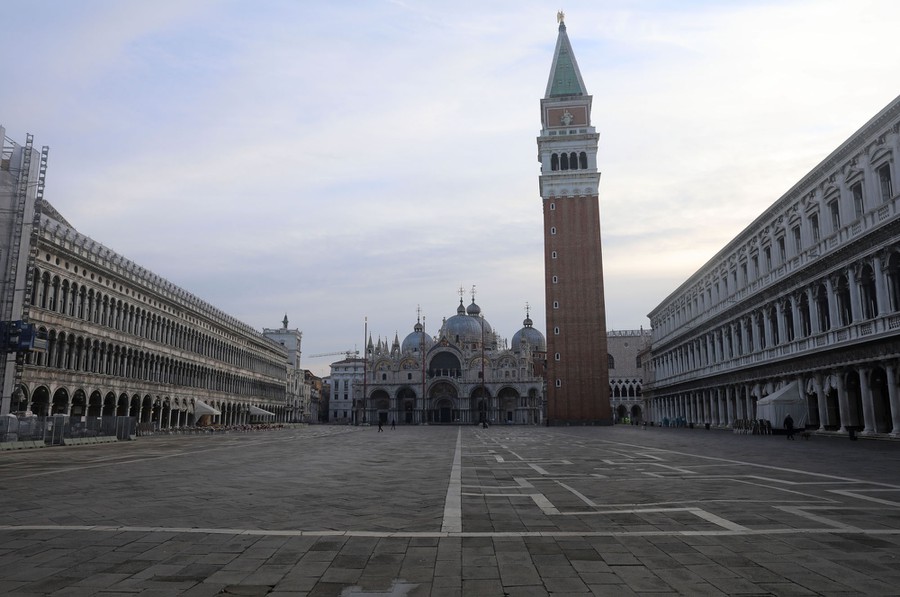 A completely empty Piazza San Marco is seen on March 9, 2020, in Venice, Italy. Prime Minister Giuseppe Conte announced a “national emergency” due to the coronavirus outbreak and imposed quarantines on the Lombardy and Veneto regions, which contain roughly a quarter of the country’s population. Marco Di Lauro / Getty. 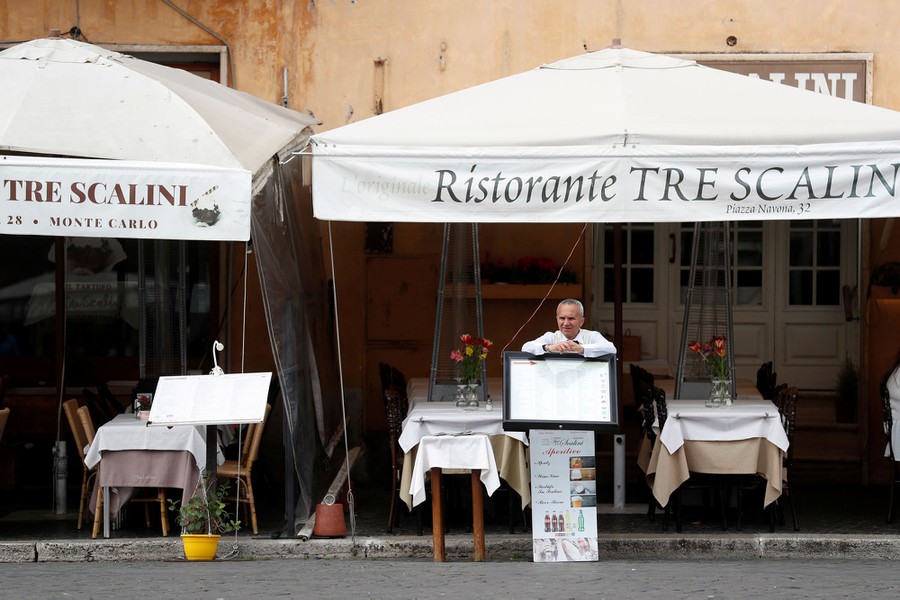 A man stands behind a menu stand at the empty Piazza Navona restaurant, after a government decree closed schools and cinemas, and urged people to work from home and not stand closer than one meter from each other, in Rome, Italy, on March 5, 2020. Yara Nardi / Reuters. 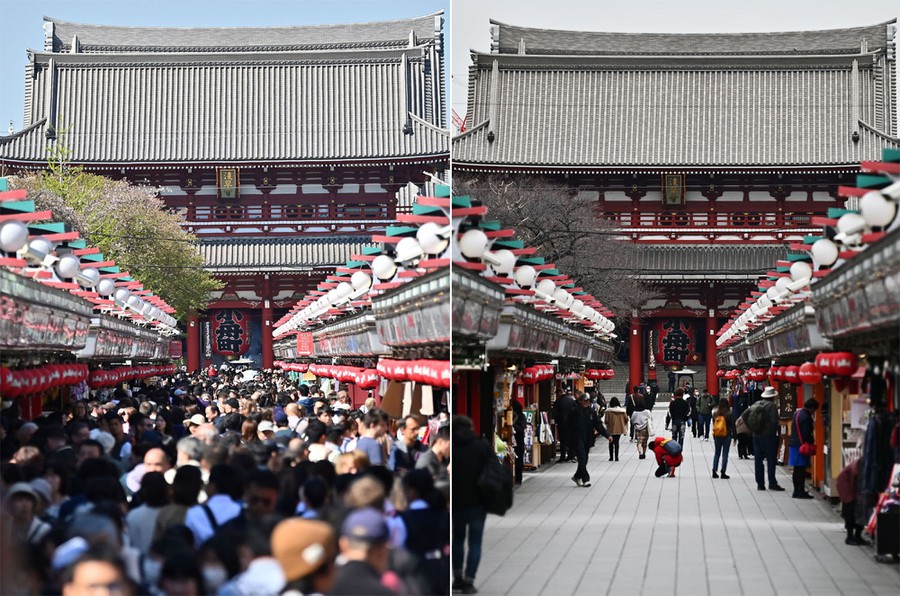 A combination photo shows a large crowd of people visiting Sensoji temple in Tokyo’s Asakusa district on April 16, 2019 (left) and a much smaller group on March 9, 2020. Charly Triballeau / AFP / Getty. 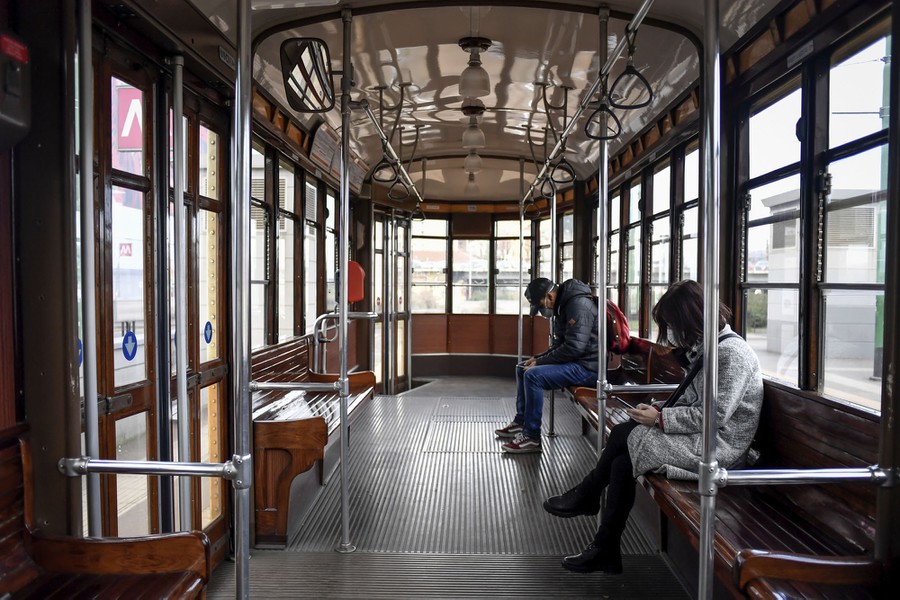 People wear masks as they ride an empty tram in downtown Milan, Italy, on February 26, 2020. Claudio Furlan / LaPresse via AP. 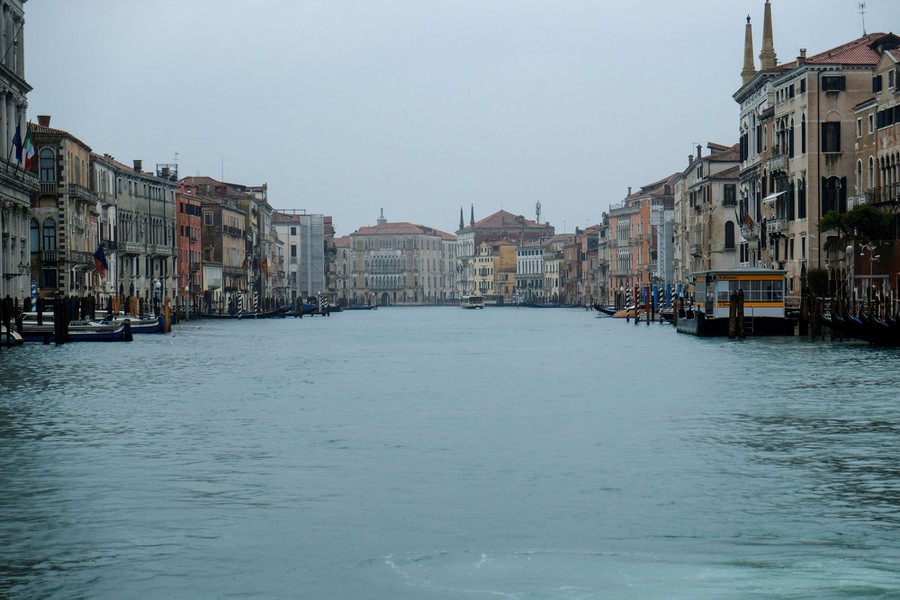 An empty canal is seen after the spread of the coronavirus has caused a decline in the number of tourists in Venice, Italy, on March 1, 2020. Manuel Silvestri / Reuters. 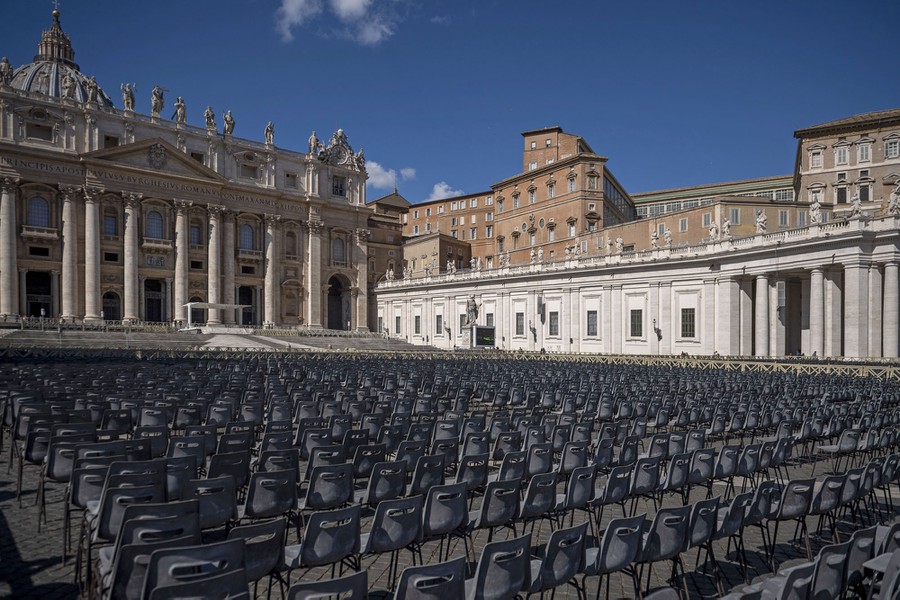 A view of empty chairs at St. Peter’s Square before the live broadcasting of Pope Francis’s Sunday Angelus prayer during the coronavirus emergency, on March 8, 2020, in Vatican City. Antonio Masiello / Getty. 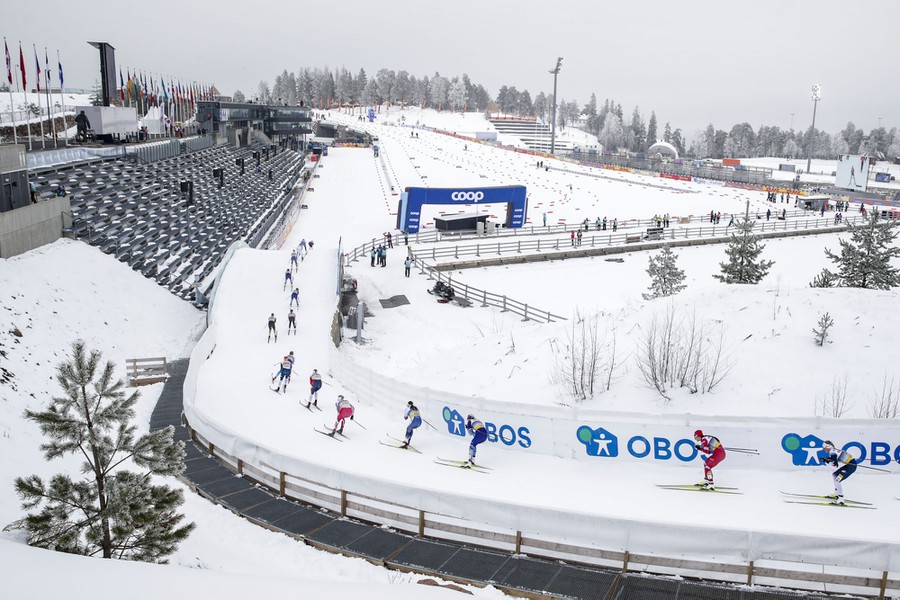 Viewing stands remain empty as a result of preventive measures linked to the spread of COVID-19, as competitors take the start of the Women’s 30-kilometer classical cross-country-skiing race at the FIS World Cup Nordic on March 7, 2020, in Holmenkollen, Norway. Vidar Ruud / NTB Scanpix / AFP / Getty. 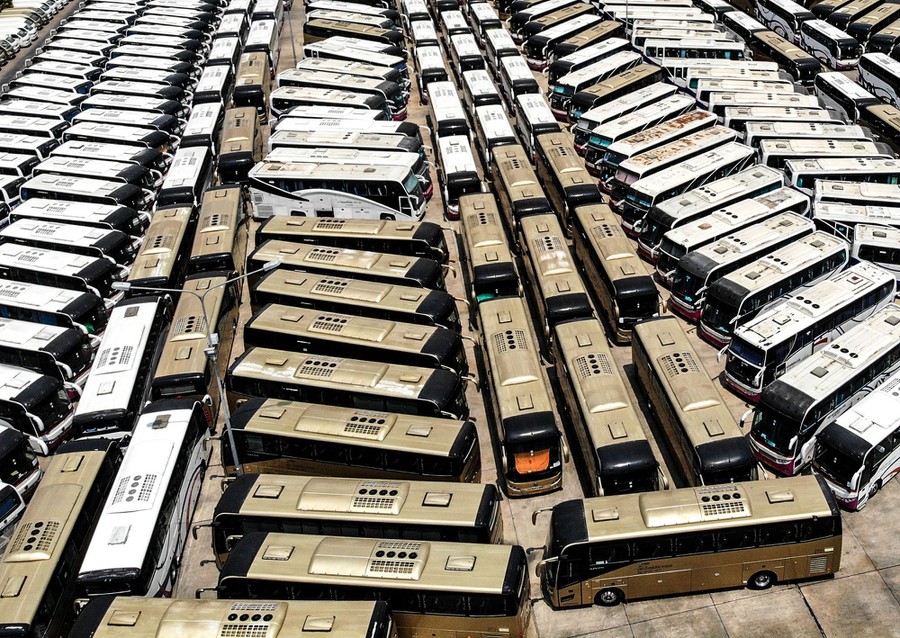 An aerial photo shows unused tourist buses packed into a lot near Suvarnabhumi Airport in Bangkok, Thailand, on March 8, 2020. Ranks of tourist buses idle under a burning sun while once-bustling theme parks lie empty, images of the hollowing out of Thai tourism due to fears of the new coronavirus. Mladen Antonov / AFP / Getty. 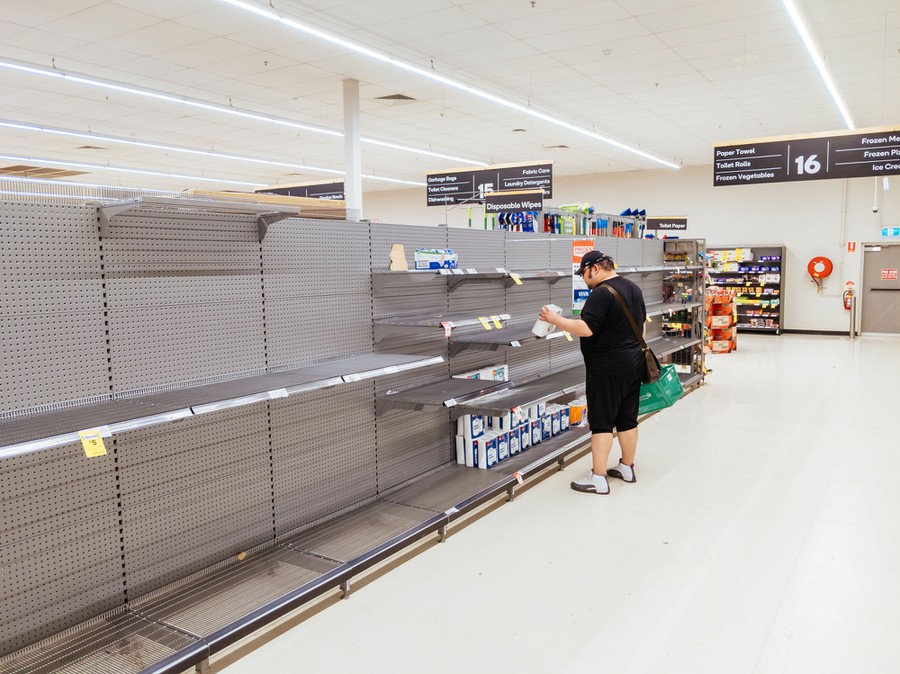 A man looks for toilet paper in an Australian supermarket after panic buying due to the coronavirus. Chris Putnam / Barcroft Media / Getty. 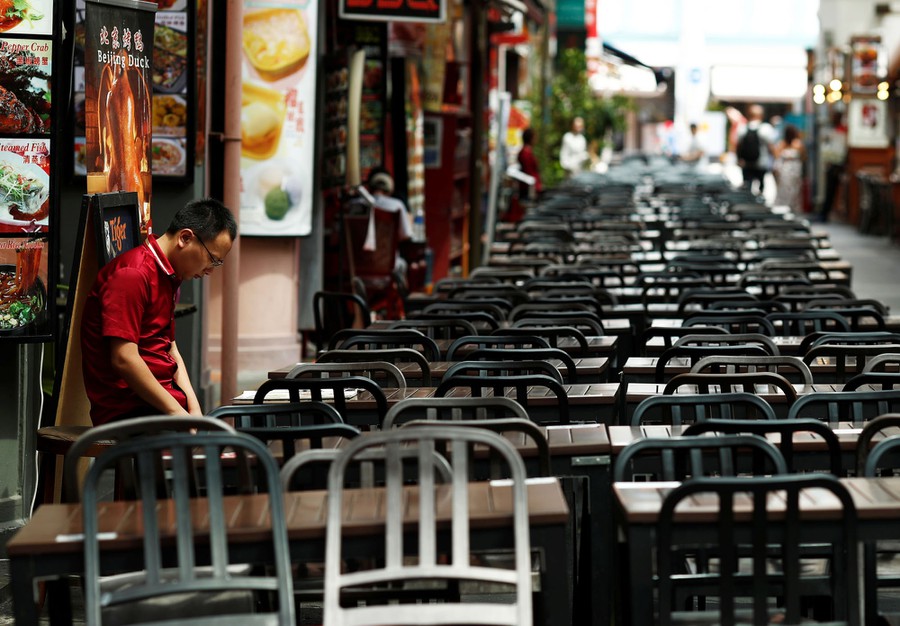 A restaurant promoter awaits customers in a largely empty part of Singapore’s Chinatown, as tourism takes a decline because of the coronavirus outbreak, on February 21, 2020. Edgar Su / Reuters. 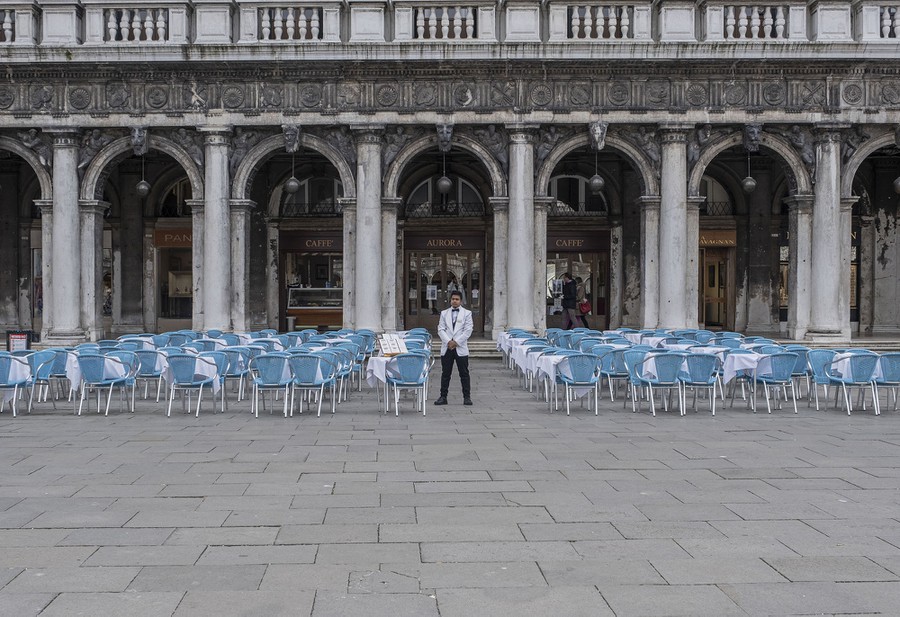 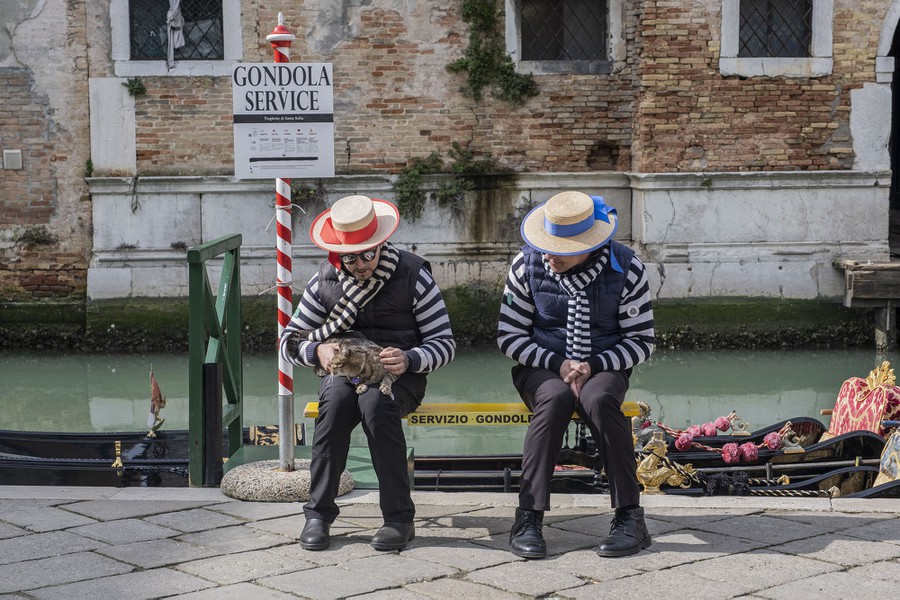 Idle gondoliers play with a cat in a deserted Venice on March 6, 2020. Stefano Mazzola / Awakening / Getty.